Gratings have been widely investigated both theoretically and experimentally as surface-enhanced Raman spectroscopy (SERS) substrates, exhibiting, under appropriate circumstances, increased far-field extinctions and near-field intensities over those of an appropriately equivalent number of isolated particles. When the grating order transitions from evanescent to radiative, narrow resonance peaks are observed in the extinction spectrum whose properties can be manipulated by controlling the grating’s geometric parameters. Here we report the application of the architectural principles of grating fabrication using a square two-dimensional array of gold-coated nanostructures that achieves SERS enhancements of 107 uniformly over areas of square centimeters. The high-performance grating substrates were fabricated using commonly available foundry-based techniques that have been chosen for their applicability to large-scale wafer processing. Additionally, we restricted ourselves to a parametric regime that optimizes SERS performance in a repeatable and reproducible manner.

Plasmonic metal/semiconductor heterostructures show promise for visible-light-driven photocatalysis. Gold nanorods (AuNRs) semi-coated with TiO2 are expected to be ideally structured systems for hydrogen evolution. Synthesizing such structures by wet-chemistry methods, however, has proved challenging. Here we report the bottom-up synthesis of AuNR/TiO2 nanodumbbells (NDs) with spatially separated Au/TiO2 regions, whose structures are governed by the NRs’ diameter, and the higher curvature and lower density of CnTAB surfactant at the NRs’ tips than on their lateral surfaces, as well as the morphology’s dependence on concentration, and alkyl chain length of CnTAB. The NDs show plasmon-enhanced H2 evolution under visible and near-infrared light. 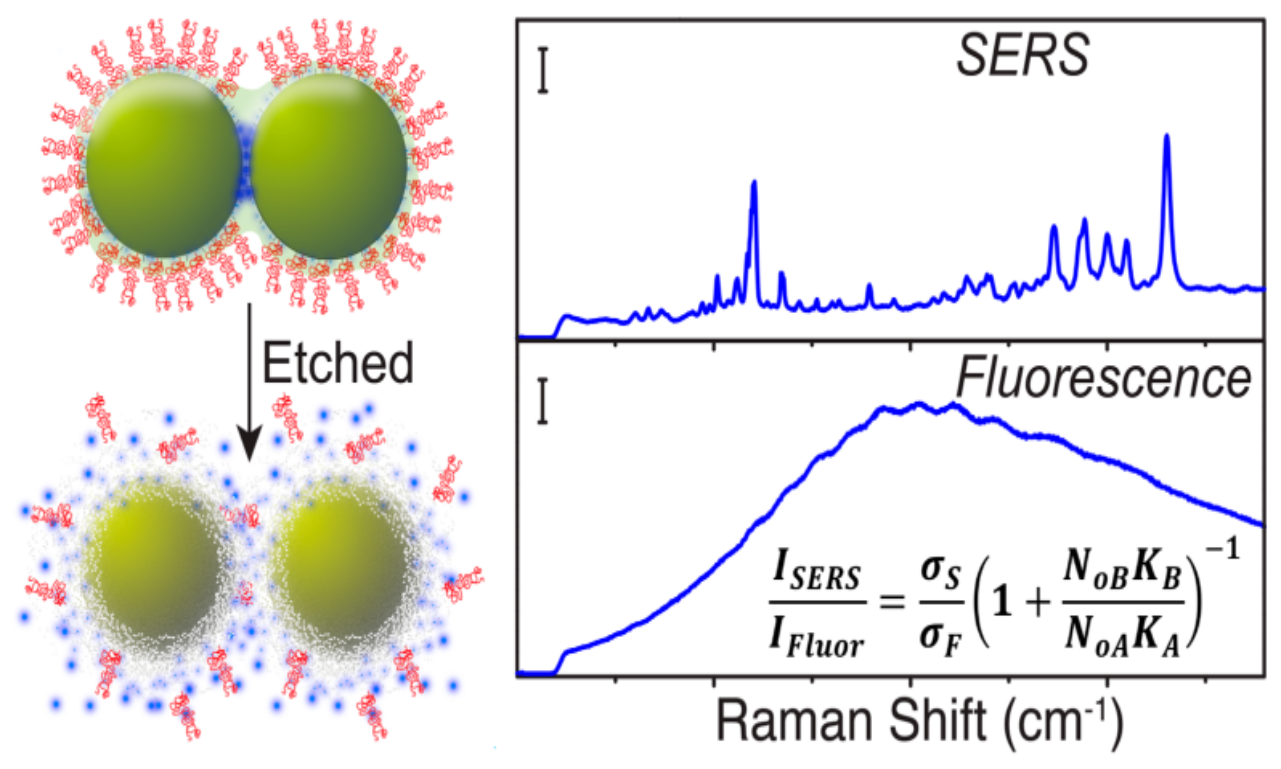 Surface enhanced Raman spectroscopy (SERS) is a powerful analytical technique that has been proposed as a substitute for fluorescence for biological imaging and detection but is not yet commercially utilized. The reason lies primarily in the lower intensity and poor reproducibility of most metal nanoparticle-based tags as compared to their fluorescence-based counterparts. Here, using a technique that scrupulously preserves the same number of dye molecules in both the SERS and fluorescence measurements, we show that SERS-based biotags (SBTs) with highly reproducible optical properties can be nanoengineered such that their brightness is at least equal to that of fluorescence-based tags. 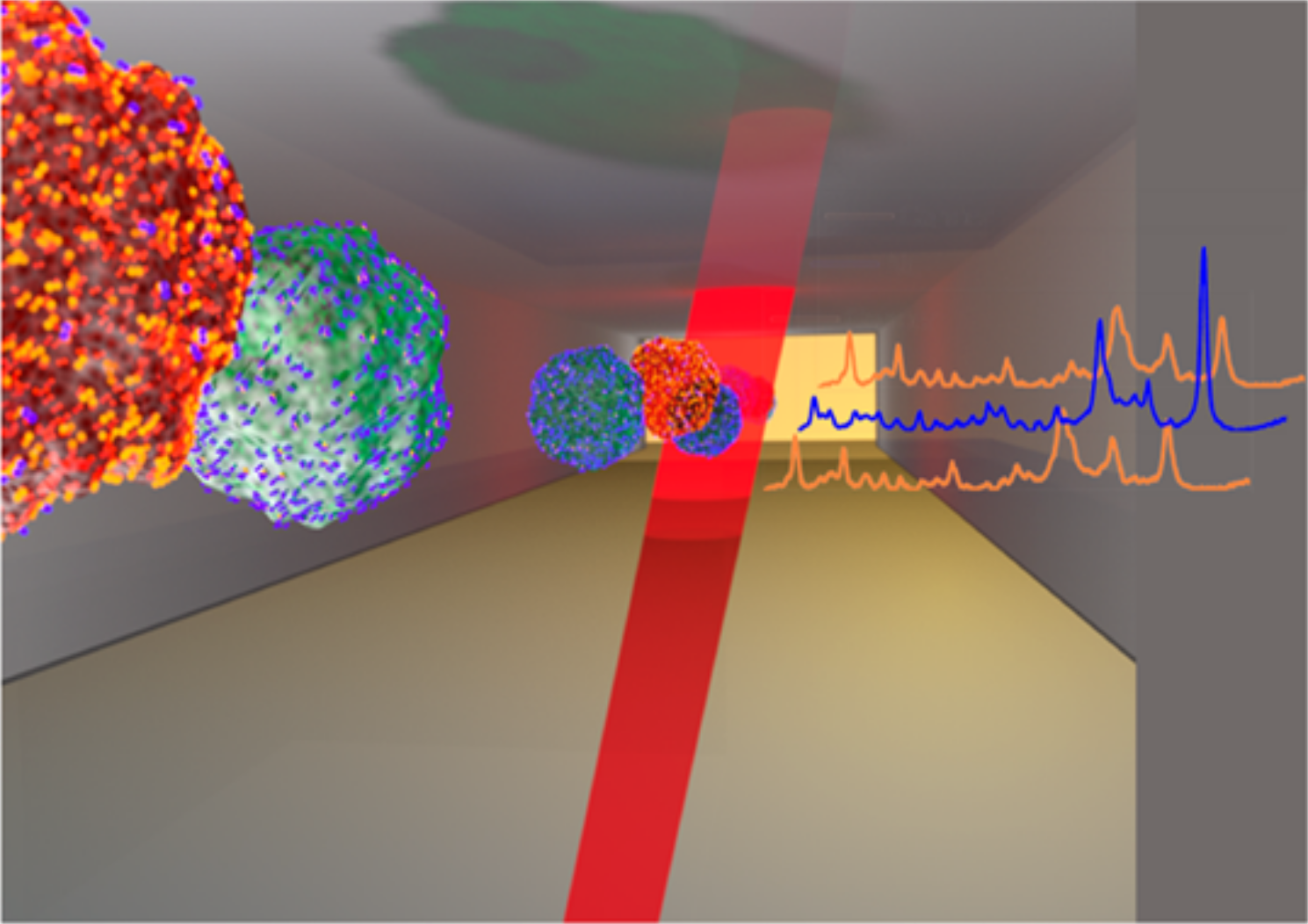 Reliable identification and collection of cells from bodily fluids is of growing interest for
monitoring patient response to therapy and for early detection of disease or its recurrence. We describe a detection platform that combines microfluidics with surface-enhanced Raman spectroscopy (SERS) for the identification of individual mammalian cells continuously flowing in a microfluidics channel. A mixture of cancerous and noncancerous prostate cells was incubated with SERS biotags (SBTs) developed and synthesized by us, then injected into a flow-focused microfluidic channel, which forces the cells into a single file. The spectrally rich SBTs are based on a silver nanoparticle dimer core labeled with a Ramanactive small reporter molecule paired with an affinity biomolecule, providing a unique barcode whose presence in a composite SERS spectrum can be deconvoluted. Individual cancer cells passing through the focused laser beam were correctly identified among a proportionally larger number of other cells by their Raman signatures. We examine two deconvolution strategies: principal component analysis and classical least-squares. The deconvolution strategies are used to unmix the overall spectrum to determine the relative contributions between two SBT barcodes, where one SBT barcode indicates neuropilin-1 overexpression, while a second SBT barcode is more universal and indicates unspecific binding to a cell's membrane. Highly reliable results were obtained for all of the cell mixture ratios tested, the lowest being 1 in 100 cells. 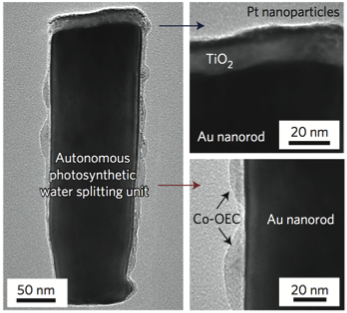 Solar conversion to electricity or to fuels based on electron-hole pair production in semiconductors is a highly evolved scientific and commercial enterprise. Recently, it has been posited that charge carriers either directly transferred from the plasmonic structure to a neighbouring semiconductor (such as TiO2) or to a photocatalyst, or induced by energy transfer in a neighbouring medium, could augment photoconversion processes, potentially leading to an entire new paradigm in harvesting photons for practical use. The strong dependence of the wavelength at which the local surface plasmon can be excited on the nanostructure makes it possible, in principle, to design plasmonic devices that can harvest photons over the entire solar spectrum and beyond. So far, however, most such systems show rather small photocatalytic activity in the visible as compared with the ultraviolet. Here, we report an efficient, autonomous solar water-splitting device based on a gold nanorod array in which essentially all charge carriers involved in the oxidation and reduction steps arise from the hot electrons resulting from the excitation of surface plasmons in the nanostructured gold. Each nanorod functions without external wiring, producing 5 x 1012 H2 molecules per cm2 per s under 1 sun illumination (AM 1.5 and 100 mW cm-2), with unprecedented long-term operational stability.